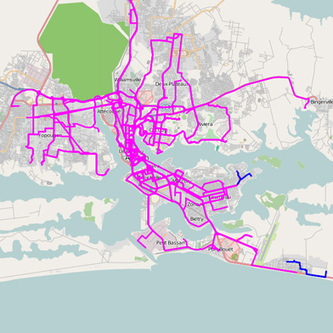 The largest-ever release of mobile-phone data yields a model for fixing bus routes.

Africa – Ivory Coast : “..IBM model prescribed changes in bus routes around the around Abidjan, the nation’s largest city. These changes—based on people’s movements as discerned from cell-phone records—could, in theory, slash travel times 10 percent.   While the results were preliminary, they point to the new ways that urban planners can use cell-phone data to design infrastructure, says Francesco Calabrese, a researcher at IBM’s research lab in Dublin, and a coauthor of a paper on the work. “This represents a new front with a potentially large impact on improving urban transportation systems,” he says. “People with cell phones can serve as sensors and be the building blocks of development efforts.”

The IBM work was done as part of a research challenge dubbed Data for Development, in which the telecom giant Orange released 2.5 billion call records from five million cell-phone users in Ivory Coast.”