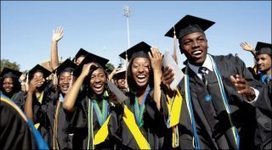 AFRICANGLOBE – America’s wealthiest universities are venturing into Africa’s fast-growing frontier markets in search of outsized investment returns that will allow them to offer scholarships, lure star professors and fund research.

UNI’s investing  in education – “Besides Northwestern and the University of Texas, which rank among the ten biggest U.S. endowments, other large schools investing in Africa include the University of Michigan, the University of Notre Dame and the University of Wisconsin. Between them these institutions manage around $50 billion.   Rockefeller University, a biomedical research institute in New York with around $1.7 billion in assets, expects to make an allocation to Africa this calendar year and has identified outside managers, chief investment officer Amy Falls said.

For Indiana-based Notre Dame, Africa accounts for about 2 percent of the $8 billion endowment. This exposure could increase to 4 or 5 percent in the next five years, said chief investment officer Scott Malpass.   “We’ve done a lot in China, Brazil, India. As Africa continued to evolve it was just a natural area for us to spend time there,” he said, adding that rising incomes and the improving quality of businesses in Africa were big draws.

Harvard University, whose $31 billion endowment is the biggest in the United States, has been exploring the investment landscape in Africa, according to a banking source who said his bank was approached by the university a few months ago.

“There has been some interest,” he said. “They were looking to debt instruments and private equity.” According to Harvard’s tax filings for the year ending June 30, 2012, the university had investments of about $198 million in Africa, but this represented just 0.5 percent of its total investments.