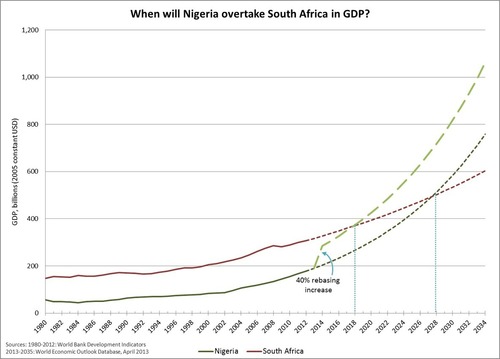 Nigeria  –  SA  :    “South Africa, and much of the world, seems to think of that country as the natural regional leader and representative in part because of the size of its economy (estimate from World Bank: $384 billion in current dollars). It is also, I suspect, because Johannesburg feels like a major modern commercial hub and Cape Town is one of the most wonderful cities to visit. Because of this implicit status, South Africa is usually given added stature at major international summits and invited to groups like the BRICS and G-20.    –    This no doubt grates at Nigerians, which also view their country (even while fully aware of their own shortcomings) as the natural leader for the continent. Lagos, by contrast, is booming but a very difficult city for foreign visitors. Disrespect from things like the portrayal of Nigerians in the South African sci-fi film District 9 adds fuel to the fire.

But Nigeria (GDP: $263 billion) has been catching up fast. But when will it pass South Africa?  Using World Bank estimates and IMF projections, the answer is… 2028 (see figure).  This makes sense given that Nigeria’s growth rate has been and is expected to remain more than double South Africa’s pace.”