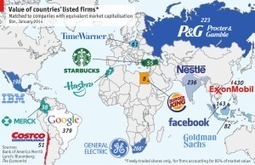 market size, Economist –  “South Africa (EZA)–which is one of my favorite markets for the next decade–has a market cap about the size of General Electric (GE), the sixth-largest publically-traded company in the world with a market cap of over $260 billion.  For a country of South Africa’s population size (a little over 50 million people) and level of development (per capita GDP of about $6,000), that represents a high level of market depth and sophistication.  Compare that to Egypt, which has a market cap on par with Burger King (BKW) at less than $8 billion.