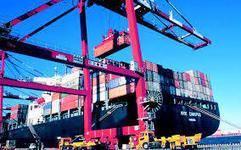 Angola – ” Container traffic at Luanda has more than doubled over the past five years to 912,900 20-foot equivalent units in 2013, according to Bengue. While that’s only a third of the containers handled at Durban last year, Angola is planning a new port at Dande, 50 kilometers (31 miles) north of the main Empresa Portuaria de Luanda EP. That facility would challenge the South African port as a regional hub for landlocked countries such as copper-rich Zambia, Bengue said.  Busiest Port  –  Durban, Africa’s busiest port according to the Port Management Association of Eastern and Southern Africa, handled 44.8 million metric tons of cargo in 2013-14, the port’s Business Strategy Manager Marina Petersen said on April 24.

Luanda port processes about 80 percent of cargo shipped to Angola, where imports account for almost all of manufactured goods in the market as the country recovers from a 27-year civil war that ended in 2002.”